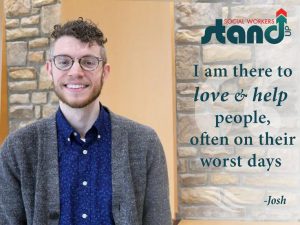 “Social Worker Shortage puts Children at Risk.”  Headlines like this have been ringing alarm bells in communities across the country.  The implications are far-reaching and cross all sectors of society.  “The shortage of social workers affects the continuity of care, especially for vulnerable populations, (and) increases the workload for already overburdened staff,” states a study completed at The University of California, Berkeley.  (Pastor, E. M., Saint-Germain, M., DeCresceza, T.,  2002)[i] And the demand for social workers is likely to be even greater over the next few years as boomers retire.

That should be good news for social workers.  Usually, a shortage of labor in an industry spurs wages.  “Your wages must be going through the roof,” said Michael Barth, Ph.D. an economist consulting with the Hartford Foundation on planning gerontology services when advised about the shortage of social workers.  Everyone in the field knows better.  But, why aren’t wages obeying the law of supply and demand?

Seeking to understand that paradox, Barth was commissioned to take a “first look” at the labor market of social work.  Completed in 2001, the study, The Labor Market for Social Workers: A First Look identifies “the highly elastic supply” of labor as a key factor.  “A characteristic of the social work labor market is that there are a lot of people that can go into the market and purport to supply themselves as social workers. What a highly elastic supply means is that if you raise the wage a little bit you get a lot more people in the field.  Social work is like that because anyone with a bachelor’s degree can get a job that many social workers think of as a social work job.”   Similarly, other master’s level professionals can capture the market traditionally filled by social workers.  Thus, as the shortage of social workers has created a labor crisis, alternative professionals have flooded the field.

Carol Nesslein Doelling, MS has been advising social workers in their careers for the last twenty five years in her role as the Career Services Center director at the George Warren Brown School of Social Work in Saint Louis and is the author of Social Work Career Development: A Handbook for Job Hunting and Career Planning 2nd Edition (2005)[ii].  She believes that social workers are not well prepared to articulate their differentiating skills.  “When a field is well established in the market and has an identity and a clear niche, then differentiating skills is less important. Social work is a field that is more diffused and there is plenty of competition from other disciplines.  For this reason, social workers really have to work to differentiate themselves with their skills and knowledge and how they can make a unique contribution.”

Lack of Parity with Other Professions

Joni* tells this story that illustrates Barth’s point:  “A dear friend of mine works as a legal assistant for an attorney at the biggest law firm in town. She has realized that it really is not right that she earns $15,000 a year more than me. She has her high school diploma and has worked in the legal field for ten years. I have my master’s degree, am working on my doctorate, used to be a Certified Addictions Counselor in the state of Pennsylvania, and have almost twenty years experience. She is shocked that I work with other human beings, trying to help them, and I can barely make ends meet each month.”

Social work wages suffer because more than 75 percent of social workers are women.  Margaret Gibelman, DSW has researched this issue and found that the more a service profession is dominated by women, the lower the worker’s average weekly salary.  “The data revealed that as the percentage of women in the identified occupational groups increases, the weekly salary decreases.”  (Gilbelman, M., 2003) [iii] For women social workers, it is a double whammy—they earn lower wages because they are female and they earn lower wages because they work in a female-dominated field.  Men also suffer from working in a female-dominated field and earn lower wages than their counterparts in other professions.

Economists understand that there are a number of factors that affect the supply of people for an occupation.  One is the relative wage and another is their “taste” for that kind of work.  Barth says, “When people are choosing an occupation they tend to choose something that think they will enjoy doing.  We call that taste.”  While completing his study, Barth talked to a lot of social workers and he found that social workers are motivated by their mission and that they have a taste for their work.  He says, “It became obvious very quickly that the taste for what social workers are doing was very high.  It was palpable.  I concluded that these people really like what they are doing.”  Barth believes that one of the reasons the pay for social workers is relatively low is that social workers like what they are doing so much that they will do it for less money.  Is everyone who likes what they do, willing to do it for less money?  Barth says, “No.”  Does the fact that social workers seem to be overwhelmingly willing to do so cause them to be exploited?  “Perhaps.”

Jessica,* a seasoned human services worker pursuing a graduate degree explains: “I never forget the people that are the reason I receive my paycheck. Too many times you see people trudge off to work and then back home. When we are at work we do good things for people. We assist them in making some life altering changes. While it is true that many social work positions are low paying and that can be frustrating, I never heard anyone say that they went into this field for the money. One does not enter social work with ideas about making millions, but about making a difference.   Making a difference to others brings a reward that is so much more valuable.”

Trends emerging from the political landscape greatly influence the social work labor market.  Perhaps the most salient is the economic situation.  As the federal and state governments continue to make cuts because of budget deficits, the funding for social workers in both the public and private sectors is likely to continue to suffer, suggests Barth.  This climate has increased the competition for funding and fee-for- service revenue, making the world of the social worker less secure than ever.

But social workers willing to make out-of-the-box transitions may find opportunities in the new landscape for specific skill sets.  For example, reductions in funding have increased expectations for managing health and mental health care costs, which has created opportunities for social workers interested in evaluating programs and demonstrating the results that the new climate of accountability requires.  Social workers with an entrepreneurial spirit may find that funding constraints have created a field ripe with possibility as programs are privatized and organizations are reorganized, many looking to partner and collaborate with others.

Doelling observes that there have been many new nonprofit organizations created in recent years.  “Many of them are small and people need to consider what it is like to be in a smaller environment, which may be better for some people than others.”  New ways of delivering services, such as the wrap around strengths-based approach, have found traction in the new environment.  These services appeal to some social workers, but not to all.

“I didn’t choose a career in social work, I was led to it,” explains Jessica.  “It’s a difficult job at best that can at times tear your heart out. It is also the most rewarding job.  I have been hit, kicked, spit at, kidnapped, and threatened with death, but I would not dream of giving it up. The parents who ask for help or the child that says ‘thank you’ is what keeps me going. Many people have said, ‘I don’t know how you do it.’   The fact is, I don’t know how not to do it. It is something within us; something we are born with; social work chooses us.”

According to Mitchell, Levin and Krumboltz (1999)[iv] chance typically plays an important role in everyone’s career.  But being “chosen” by social work as Jessica was or leaving your social work career up to chance is exactly what you shouldn’t do, according to  Doelling who encourages people to research the work setting that they are considering.  “Most people don’t have the time or don’t take the time to do that and it really makes a difference for them.”  She says, “I tell them tell them–over and over again–that in this social work labor market that it is going to depend on how you manage your own career because the structured career path does not exist like it once did– you are running your own show. The assumption is that ‘if I take this job that it is all going to fall into place’ and that is just not the case with the kind of economy that we have.  If we can get people to focus, so that they can spend time doing the research and building their network, they can make more informed choices and ultimately have more choices.”

Doelling also advises social workers considering a new job to “follow the money.”  She explains: “That doesn’t mean taking a position that is related to the hottest idea of the moment.  But by understanding the funding streams, how they have shifted and are shifting, social workers can anticipate changes that are going to come up and opportunities that they can take advantage of.”

Doelling urges social workers when considering a specific position to negotiate offers.  “I am really encouraging people to think about that, attempt it and to do that faithfully and that can really have a positive impact.”

Doelling says that graduates now spend an average of three months looking for a position, which she says, is not long enough.   She cites the example of a student who did what she recommends:  “This graduate had some prior experience.   After she got her masters, she went back home to California, and took a temporary job at her old hospital.   She looked for six months and really worked hard at it–doing the networking and the research–until she found the supervisory job that she wanted.  She turned down other offers, but that was part of her plan.  She was the right person for the job and she was able to negotiate a good salary for herself.”

A meaningful social work career does not necessarily mean poor wages.  But it does seem that social workers will earn a better living only by focusing on that goal.  They need to work at understanding and articulating their differentiating skills and abilities.  They need to research the field and each position so that they can make creative and strategic work choices.  And they need to be willing to negotiate reasonable compensation rates.  Social workers are great advocates for their clients.  Now is the time to advocate for themselves.