“When you are passionate about something you do, why put an end to it?”  ~ Dr. Arthur C. Bartner, USC Trojan Marching Band Director

“I know that voice!”  No surprise there; the raspy roar that Dr. Arthur C. Bartner croaks out over his rock-n-roll sound system is definitely like no other. 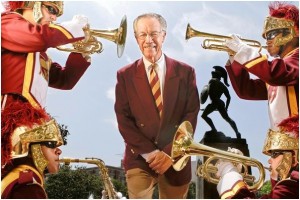 “I’m probably more of a nuisance than the band to this campus because I get excited.’  Does he ever!  You really will be laughing-out-loud when you watch this short video of Bartner and see first-hand the energy with which he charges across the field shouting, “Get ‘em excited! Get ‘em excited! GET ‘EM EXCITED!!”

Directing a marching band to the greatness of the USC Trojan Marching Band has got to be the essence of leadership.  Bartner, the director for the last 42 years, has over 300 students from all majors, making music together.  And if that wasn’t enough, they are also marching in step and creating elaborate unified formations.

But what really distinguishes Barter is his passion for the band.    As the leader of one big pep rally, he is clearly the cheerleader-in-chief.  As one band member said, “the most amazing thing about band camp is the spirit.”

It wasn’t always that way.  When Bartner first came to USC in 1970, participating in the marching band was a dreaded obligation to fulfill the scholarship requirement for music majors.  Bartner did away with that requirement and opened it up to everyone.  Now more students want to participate than they have spots for, the majority of whom are engineering students.

The Spirit of Troy has had many spectacular accomplishments:  They have been featured in at least 10 major movies; performed in the 1984 Summer Olympics in Los Angeles; performed on the title track of the 1979 Fleetwood Mac album; they have two platinum records; they have performed around the world, including at Rome’s Coliseum, Hong Kong and Nagoya, Japan.  Each year the band plays the 1812 Overture with the Los Angeles Philharmonic Orchestra at the Hollywood Bowl.  And, those are only some of their accomplishments.

For me though, what really epitomized the Spirit of Troy was their 2011 Spring Concert where they played Lady Gaga’s Bad Romance.   Bartner, at 71 years old conducts the band with his own rendition of Lady Gaga moves, swishing and bobbing his head like a youngster.  You can see his delight as he looks around and watches the band members, all decked out in their uniforms, Trojan helmets, and sunglasses, put down their instruments and complete the intricate dance moves of the piece!   Watch Lady Gaga’s Bad Romance Spring Concert 2011 here.

The more I learned about Bartner, the more I wanted to understand how someone could sustain such a frenetic pace at a fever-pitch level of energy for so long.  I wondered why he wasn’t ready to pass on the baton.

His contribution to The Spirit of Troy’s greatness seems rather obvious.  But not so straightforward, how does he keep living the mantra of the Trojan’s “Fight On!”  himself?   To find some answers, I turned to Ellen Langer’s new book Counterclockwise.  Langer, professor of psychology at Harvard, has been researching mindfulness and aging for over 40 years and has demonstrated repeatedly how “our limits are of our own making.”

If you watched the video of Bartner, you won’t be surprised to learn that his voice has suffered from all those years of rants and roars.  “It’s amazing I have a voice at all.  Doctors have looked at it, I have nodes, my vocal cords are all stretched out, but it still works.”  For some, that would be a cue to hang it up, but not Bartner.

“Over time I have come to believe less and less that biology is destiny. It is not primarily our physical selves that limit us but rather our mindset about our physical limits. Now I accept none of the medical wisdom regarding the courses our diseases must take as necessarily true,” explains Langer.

Bartner does indeed have just the type of mindset that Langer is talking about, which may explain why he so successfully fights on.   “I don’t believe in getting sick,” Bartner asserts.

True to his word, in over 40 years, he has only missed one home game, and that wasn’t because he was sick, it was because there was a little scheduling glitch.  He was scheduled to lead an international band of 400 students at the opening of Epcot Center in Orlando, Florida in 1982.

Seems like Bartner fights on because he passionately believes that he can.   To that, I think Langer would say, “You go, dude!”

Do you have mindsets that may be limiting your own possibilities?  Does Bartner inspire you to consider how you might continue pursuing your passions, in spite of, any limitations that might be presenting themselves?

If you would like to be coached on shifting your own mindsets, please call me for a free complimentary session at 805.448.7681 or schedule a session using my on-line calendar.

Diane Haithman, Special to the Los Angeles Times, The Man Behind the Band at USC, September 4, 2011