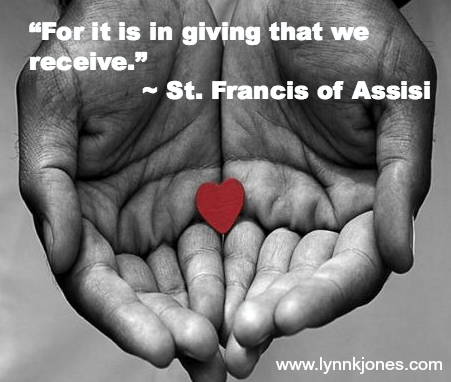 “For it is in giving that we receive” ~St. Francis of Assisi

Would you like to give gifts this year that tap into the power of giving and your intentions?  Do you want to make a real difference with the gifts you give?

The act of giving increases the happiness, health and social connectedness of people, according to research at the Greater Good Science Center.  Giving benefits not just the individual recipient of a gift, but the community too; the givers’ health and happiness is improved while communities are strengthened—all through the power of giving.

When you give a gift, such as sharing your time and energy with someone, you are not only helping them, but also benefiting yourself and the community at large.  In fact, simply viewing an act of giving or kindness with a stranger reaps health benefits.  Researchers at Harvard University call this the “Mother Teresa Effect.”  Levels of Immunoglobin A (responsible for increased immunity) markedly increased in test subjects after simply witnessing somebody involved in a charitable act.

This suggests that our gifts this holiday season can be much more than a material token of appreciation; they can positively reach into the New Year and beyond, touching the receiver, the giver and our communities.

I have been moved by the stories of my clients who told me about how they received a gift of coaching when they couldn’t afford it.

Jacob’s wife called me to inquire about coaching for her husband.  Jacob was not happy at his job, but didn’t know what he would do if he left.  “He’s in a funk.”  She decided to give Jacob a gift of coaching.

After several coaching sessions, Jacob said that being coached “helped him to see things differently and boosted his self-confidence.”  Jacob worked on a proposal for his boss and put together a new resume, but before he even had a chance to give his boss his proposal, his boss told him that he was giving him a raise and also supporting him in funding some training to develop his career.

Jacob was thrilled.  “I will be forever grateful knowing that my wife cared so much and wanted me to grow professionally to invest in my future.  I was so stressed that this was a gift that not only benefited me and my career, but my family.”

Jessica called me because both she and her husband were at a crossroads.  Jessica’s paid internship was coming to an end and so was her husband Robert’s post doc at UCSB.  She thought that coaching would be helpful for them, but neither Jessica nor Robert felt as though they could afford it, as they were so nervous about their employment status.

Jessica’s mom really wanted to help, but didn’t know how.  “She saw we were struggling and offered to buy a coaching package for us to share.

“It really showed her love and support and demonstrated a lot of encouragement.”

“Through coaching we were motivated to tackle our employment situation.   What had felt like a daunting task began to seem more manageable with interesting possibilities,” said Robert.

Jessica applied for a job at her organization and was hired before her paid internship ended.  Everyone could relax a little bit with that uncertainty resolved.  Robert discovered that his post doc was going to last 6 months longer than he had originally thought—plenty of time to pursue the interesting possibilities that are opening up for him.

Inspired by the experiences of Jacob, Jessica and Robert I decided to offer a discounted rate on several Gift of Coaching packages this holiday season.   I hope you will consider giving someone you care about either the Positivity, Personal Success or Transformation Gift Package this holiday.  What a great way to give a gift that will touch not just the recipient but their family and community, just like it did for Jacob, Jessica and Robert.

Do you have someone you care about who would benefit from coaching? Please check out my discounted coaching packages.  I am happy to discuss your interest in making a gift.  Set up a time to speak with me at www.lynnkjones.com/calendar or call me at 805-448-7681.

It is my hope that as you go about your holiday routine you stop and remember the multifaceted power your gifts may have.

To learn more about purchasing the gift of coaching at a discounted rate for someone in your life click http://www.lynnkjones.com/gift-coaching-packages/

P.S. Click this image and download it to remind you of the power of YOUR giving this holiday season”!

Dr. Lynn K. Jones is a Board Certified Coach and an Advanced Certified Personal and Executive Coach based in Santa Barbara, California and a sought after coach and consultant for organizations and individuals across the US. Her doctoral work completed at the Wurzweiler School of Social Work, Yeshiva University concerned organizational culture; she coaches, consults and trains organizations on what they need to do to create organizational cultures that are aligned with their vision and values using a process of Appreciative Inquiry. She coaches individuals on achieving their reflected best selves. A MSW@USC faculty member, Dr. Lynn K. Jones, MSW, DSW, CSWM, teaches Human Behavior and Social Environment and Leadership to social work students at the University of Southern California.